We conducted a study of Ecological Focus Areas (a Greening measure) on a sample of more intensively managed arable, dairy and beef farmland. We measured habitat areas on these farms, categorised them into EFA habitats, and compared them with scenarios of 5% and 7% threshold levels of EFA area. the vast majority of farms exceeded both the 5 and 7% thresholds. The study was published in Land Use Policy in 2019.

Update: a preprint version of the published paper can be viewed here, for those unable to access the journal article. 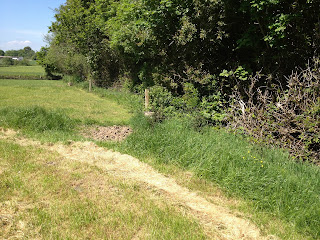 The Common Agricultural Policy (CAP) for the period 2014-2020 resulted in the introduction of three mandatory ‘Greening’ measures aimed at improving the environmental performance of EU agriculture. The Ecological Focus Area (EFA) measure within Greening was intended to help improve biodiversity associated with European tillage farms. To improve understanding of the implementation of this measure (and to inform the design of future measures), data are needed on the implementation of Ecological Focus Area measure on tillage farms. In the discussions preceding the last round of CAP reform, there was intense discussion about whether grasslands should be subject to Ecological Focus Areas, or a similar measure. In the end, they were not, but it was reasonable to expect this proposal to surface again in the next CAP reform (corresponding to 2020—2021). With these issues in mind, we conducted a study with the following objectives:

Ultimately, we aimed to use these data to aid the identification of appropriate management strategies to attempt to halt the decline of biodiversity and associated ecosystem services.

We surveyed 119 intensively managed farms across three farming enterprises (tillage, beef and dairy) in Ireland to estimate the percentage of EFA and other farmland habitats occurring within these farms. The *median* farm habitat area of 5% for tillage, 6% for intensive beef and 6.55% for intensive dairy (see Fig. 1, from the supplementary information in Larkin et al. 2019). Linear features such as hedgerows, buffer strips and drainage ditches accounted for 43% of the total area of wildlife habitat surveyed. Hedgerows were the most abundant and frequently occurring wildlife habitat, present on 100% of farms surveyed and accounting for an average of 3% of the total area of every farm.  Other semi-natural wooded habitats (semi-natural woodland, isolated trees, field copse) accounted for a further average of 2% area of farms surveyed.

Habitats present on farms were categorised into three EFA subcategories a) Irish-eligible EFA b) EU-eligible EFA and c) ‘non-eligible habitats’. ‘Irish-eligible EFA’ are those habitats allowed under Irish legislation to qualify as EFA. ‘EU-eligible EFA’ are those habitats allowed under EU legislation to qualify as EFA but were not implemented as EFA in Ireland.  ‘Non-eligible habitats’ are habitats within the ‘wildlife habitats’ category described above, but which do not qualify as EFA under Irish or EU legislation. We measured the area of habitats within these three categories, and applied the EFA conversion and weighting factors. Note that these conversion factors typically result in the area of EFA habitat being greater than the geographical area occupied by the habitats.

All tillage farms and almost all pastoral farms in our sample met the current 5% EFA requirement (see Fig. 2 below) (see Fig. 3 and Table 3 in Larkin et al. 2019).

Field margins were the most frequently encountered habitat that was ineligible under Irish EFA prescriptions, but which qualifies as EFA under EU legislation. Additionally, a large percentage area (average of 9.5% after application of conversion and weighting factors) of farms sampled was covered by habitats not classed as EFA under EU legislation.

So what do we learn from this study?

There is a lower absolute area of habitats on more intensive farms, compared to the area of habitats from studies that sample farmland from the wider countryside (Rótches –Ribalta et al., 2020)-. This is probably not surprising, but is confirmed nevertheless.

Considering a scenario in which the EFA target increased to 7% (but existing eligibility criteria for habitats remained), only eight farms were below this threshold (3 tillage, 4 dairy, 1 beef; 7% of the farms surveyed). (These values are after application of the conversion and weighing factors associated with the Ecological Focus Area measure.)

A large percentage area (average of 9.5% after application of conversion and weighting factors) of farms sampled was covered by habitats not classed as EFA under EU legislation. Including this wider set of habitats will help farms attain threshold levels, and will better ensure biodiversity protection. (See also Rotchés-Ribalta et al. 2020.)

There is a very high dominance of farmland habitats by hedgerows (and these data tell us nothing about hedgerow quality). More generally, the EFA measure includes no specification regarding the quality of habitats, or their effectiveness at supporting biodiversity or providing ecosystem services. One method of improving Greening requirements would be the addition of a quality parameter or some method of quantifying habitat quality to help increase its environmental output e.g. through a results-based approach.

There is a broader range of beneficial wildlife habitats already present on intensively managed farms that is not incorporated into or protected under policy and legislation. There is a surprisingly large area of these ‘unprotected/unrecognised’ habitats. To protect biodiversity, these habitats may be incorporated into future prescriptions, and are highly likely to be of higher biodiversity value than newly created habitats.  Preserving these habitats can help reduce ecological losses, increase biodiversity, promote the sustainability of agricultural systems, and reward/recognise the existing habitats on Irish farmland.

See the Larkin et al. (2019) article for a wider discussion of additionality associated with the EFA measure.

Update: a preprint version of the published paper can be viewed here, for those unable to access the journal article.

This research was funded by the Teagasc Walsh Fellowship Programme.