This research investigated the relationship between species diversity (measured as evenness) and ecosystem function (measured as yield of aboveground biomass ). We used a large-scale experiment (28 sites) and an innovative methodology to quantify the relationship between diversity of agricultural grassland species (richness, evenness) and aboveground biomass (yield). This post discusses the results from the first year of data as reported in Kirwan et al. 2007.


Since about 2002, I've been involved in a large collaborative study of grass-legume mixtures as part of a European consortium 'Quality Legume-Based Forage Systems for Contrasting Environments'.

As part of this wider project, we investigated multi-species mixtures across a wide range of geographic, climatic, soil and other conditions. We achieved this by establishing a common diversity experiment that involved monocultures of four species (two grasses and two legumes) and a range of 4-species agronomic communities at each of 28 pan-European sites. A common field experiment of 30 plots was established at each site where two legume and two grass species were sown. We used a design with four monocultures (single species) and 11 mixtures (with systematically varying proportions of four species). The scale of this experiment is unprecedented for any diversity study with plant systems, but particularly so for the agronomic system we use. With these data we estimated diversity-function relationships at each site, and test the generality and stability of relationships across sites.

The results indicate strong benefits of sward diversity in intensive grassland experiments, across . Applying our methodology to data from the first year of this common experiment at 28 European sites, we showed that the above-ground biomass of four-species mixtures (two legumes and two grasses) in intensively managed grassland systems was consistently greater than that expected from monoculture performance, even at relatively high productivity levels. The extent of this benefit of diversity was related to the evenness of the mixture: a 4–species mixture with an even abundance of 25% of each species performed better than a 4-species mixture dominated by one of the species. Averaged across multiple sites, we found that the performance of mixtures generally exceeded that of the best-performing monoculture species. Mixtures also strongly reduced the incidence of weeds in the sward.
In general, all pairwise interactions contributed equally to the additional performance of mixtures; the grass-grass and legume-legume interactions were as strong as those between grasses and legumes.

These data are consistent with complementarity among species whereby more diverse plant swards are better able to capture both light and soil nutrients than less diverse swards, through variation in the leaf and stem architectures and distribution of roots in the soil respectively. It is well known that nitrogen fixation by legumes can enhance biomass production of a grass sward, but this study also showed complementarity between different grass species, and between different legume species.
Further work is examining the results over three years, to assess the temporal persistence of the results.


Acknowledgements
Co-ordination of this project was supported by the EU Commission through one of the Working Groups in COST Action 852 ‘Quality legume-based forage systems for contrasting environments’, and through an award to Laura Kirwan by the Irish Environmental Protection Agency. 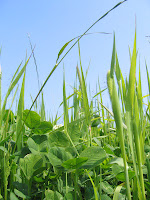