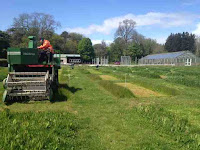 ﻿
Knowledge of the effect of severe weather events is a major uncertainty in models that aim to predict the effect of climate change on agricultural systems. As part of the EU-funded AnimalChange experiment, we are testing the effects of severe weather events on grassland production, and the potential role of multi-species mixtures as a mitigation/adaptation measure.
This work is being undertaken by Eamon Haughey as part of his doctoral research. This same experiment is being repeated by our project partners at Agroscope (ART, Zurich, Switzerland).

We established a field experiment with experimental plots comprised of monocultures, two-species mixtures and four-species mixtures of grassland species used in grassland forage production. A rain shelter (see below) will be placed over one of a pair of similar plots to impose a drought stress for a period of several weeks. We will measure the response of the vegetation to the drought by comparison with the control plot.

The rain shelters are being finalised at the moment, and being readied for action.  I've been keen to have a community diversity*disturbance experiment since our work on Biodepth and COST 852, and am thrilled to at last get the chance to test this in a model system with such practical relevance. Exciting times!