Our research at European Grassland Federation 2013

The Role of Grasslands in a Green Future
Proceedings of the 17th Symposium of the European Grassland Federation (Eds. Áslaug Helgadóttir, Alan Hopkins)

This was another excellent EGF conference at a wonderful location in Akureyri, Iceland. The scientific programme was as impressive as the social programme, which featured waterfalls, geysers, choirs, horse exhibitions, and 'cured shark'. Cured shark is certainly an acquired taste, and was considered by one participant as tasting like 'a baby's nappy' (or what they imagined a baby's nappy would taste like...).

Here, I provide the titles, abstracts and contact details of the four contributions that we made to EGF2013. Of particular interest was the growing frequency of research into multi-species mixutres of grasses and legumes. The opening talk by my good friend and long-time collaborator Andi Lüscher was a tour de force of this theme, and his paper will be published in Grass and Forage Science in due course. I also provide the abstract of his talk. 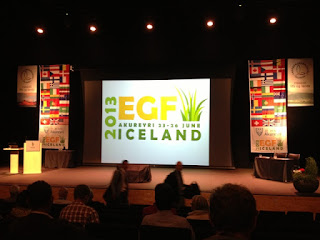 The relationship between functional group interactions and multifunctionality in grasslands
Kirwan L. and Finn J.A.

Abstract
European grassland-based livestock production systems are challenged to produce more milk and meat to meet increasing world demand and to achieve this by using fewer resources. Legumes offer great potential for coping with such requests. They have numerous features that can act together at different stages in the soil-plant-animal-atmosphere system and these are most effective in mixed swards with a legume abundance of 30-50%. The resulting benefits are a reduced dependency on fossil energy and industrial N fertilizer, lower quantities of harmful emissions to the environment (greenhouse gases and nitrate), lower production costs, higher productivity and increased protein self-sufficiency. Some legume species offer opportunities for improving animal health with less medication due to bioactive secondary metabolites. In addition, legumes may offer an option for adapting to higher atmospheric CO2 concentrations and to climate change. Legumes generate these benefits at the level of the managed land area unit and also at the level of the final product unit. However, legumes suffer from some limitations, and suggestions are made for future research in order to exploit more fully the opportunities that legumes can offer. In conclusion, the development of legume-based grassland-livestock systems undoubtedly constitutes one of the pillars for more sustainable and competitive ruminant production systems, and it can only be expected that legumes will become more important in the future.

Abstract
In a multisite field experiment conducted over three years, the amount of total nitrogen yield (Ntot) and yield from symbiotic N2 fixation (Nsym) was quantified from grass-legume stands with greatly varying legume proportions. The five experimental sites spanned a climatic gradient from to continental, and from temperate to arctic. Ntot of mixtures was, on average, greater than that of monocultures at all sites, the effect being most pronounced when legume proportions in mixtures were around 60%. Ntot was 256 kg ha-1 yr-1 when calculated across all years and sites from mixtures with 50% legume proportion, while the corresponding Nsym was 77 kg ha-1 yr-1. Thus, 30% of Ntot originated from symbiotic N2 fixation. Average Nsym in mixtures was positively related to mean site productivity (P=0.096), while percent Nsym (the ratio of Nsym to Ntot) was not (P=0.909). This indicates that the relative contribution of N2 fixation to Ntot remained, on average, unchanged across a large productivity gradient. We conclude that the use of grass-legume mixtures can contribute to resource efficient, yet productive, agricultural grassland systems under a wide range of environmental conditions.
Keywords: N uptake, symbiotic N2 fixation, climatic gradient, sustainable intensification

The Role of Grasslands in a Green Future 135-137
Nutrient uptake in soil niches affected by plant species and drought stress
Hoekstra N.J.1,2, Finn J.A.1 and Lüscher A.2
1 Teagasc, Environment Research Centre, ,
2 Agroscope Reckenholz-Tänikon Research Station ART, Zurich, Switzerland
Corresponding author: Nyncke.Hoekstra@teagasc.ie
Abstract
Benefits of grassland mixtures over monocultures are hypothesized to be based on niche complementarity among plant species. The objective of this experiment was to use tracer methods to assess the below-ground niche differentiation between deep and shallow rooting species under benign and drought conditions. A field experiment was established with plots containing monocultures and mixtures of Lolium perenne (Lp), Cichorium intybus (Ci), Trifolium repens (Tr) and Trifolium pratense (Tp) according to a simplex design. Using rainout shelters, half of the plots were subjected to a drought treatment of 10 weeks summer rain exclusion. During the drought period, a rubidium chloride solution was applied in 50×50 cm sub-plots at 5 and 35 cm depth and Rb concentrations and uptake in the individual plant species was measured. Results show that Rb uptake was much higher from 5 cm depth compared to 35 cm depth for all species. There was a relative shift of Rb uptake to the deeper soil layer under drought conditions for all species. The deep rooting species (Ci and Tp) were shown to have relatively higher Rb uptake at 35cm, and the shift to deeper root layers under drought conditions was larger.
Keywords: grassland mixtures, Rubidium, rare elements, niche differentiation

The Role of Grasslands in a Green Future 189- 191
The relationship between functional group interactions and multifunctionality in grasslands
Kirwan L.1 and Finn J.A.2
1 Institute of Technology,
2 Teagasc, Environment Research Centre, ,
Corresponding author: lkirwan@wit.ie
Abstract
Species composition and biodiversity of managed grassland ecosystems deliver multiple ecosystem processes. A major challenge is to identify community compositions that optimize the simultaneous supply of several ecosystem functions. Here, we quantify the impact of species interactions on multifunctionality in a grassland ecosystem, using a statistical approach that separately estimates the impact of species identity and interaction effects. We apply a multivariate extension of this approach to experimental data on multiple grassland functions, including aboveground biomass, forage quality measurements and soil measurements. We found that differing species-interaction relationships are associated with the multiple functions. This approach can help facilitate the selection of a community composition that optimizes species interactions for multiple functions.
Keywords: multifunctionality, ecosystem functioning, species identity effects, species interaction, diversity effects