We recently published an article in the Irish Journal of Agricultural and Food Research entitled ‘A comparison of grassland vegetation from three agri-environment conservation measures’. 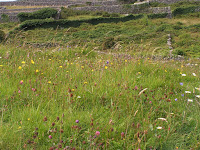 We conducted a once-off snapshot survey of the type of vegetation found in three different options for grassland conservation under the AEOS agri-environment scheme. We sampled the vegetation in 20 fields in each of three different grassland options in AEOS (a total of 60 fields). This gives us a good indication of the type of vegetation in the fields enrolled in these AEOS options at the time of our survey. Our results revealed that fields in the Natura option had highest vegetation quality, those in the Traditional Hay Meadow option had lowest vegetation quality, and those in the Species Rich Grassland option were intermediate between the two.


To our knowledge, this was the first time that an Irish survey of grassland quality in different grassland options has been published. It provides a useful insight into the types of vegetation quality that one finds across the different grassland options, and should be a springboard for further research that can explore this topic in more detail. As a once-off survey, this research does not allow us to track trends over time. We do not know whether the vegetation quality in these options is increasing or decreasing over time – hence, we simply do not know whether these options are helping to halt species decline in the sampled fields. If the fields retain the same management over a 5-year period, then we would be able to re-survey them and measure changes in vegetation quality over time, and we would be able know their effects on species declines.


As a survey that focused on vegetation quality only, we do not know the effect of these options on other types of biodiversity e.g. birds, small mammals, butterflies, beetles and, or soil animals and soil microbes.


Our research article (like all research) had limitations, and we expand on these further (below). But what did we learn from our research?


1.       In general, sites enrolled in the Natura option were generally associated with high vegetation quality. Sites in the Species Rich Grassland option were intermediate between Natura and THM.


3.       For popular and over-subscribed measures such as the grassland options, a method of targeting to prioritise the inclusion of higher quality vegetation would be to increase the eligibility criteria to access the THM or SRG options. This would increase the cost-effectiveness *within* an option. Note that because one can increase the cost-effectiveness does not necessarily mean that an option has no effect; it just means that it could be more efficient.


4.       We discuss how an output-based approach would provide a financial incentive for improved environmental benefits – for example, linking more positive species indicators to higher payment. Our research provides an important opportunity to learn how to improve these grassland options over time, but also to consider the kinds of biodiversity objectives to be implemented in the wider countryside.


A recent media article in Farm Independent reported this work with the headline, “GLAS scheme is not working, claim experts”. This headline is not supported by the evidence presented in our research article. We examined options in the AEOS scheme, and not the GLAS scheme. The AEOS scheme addressed multiple objectives, of which biodiversity is one (albeit an important one). Within the biodiversity objective, there are multiple different measures and options. Of these, we have examined three different grassland options. Thus, our research only addresses a fraction of the overall options/measures of a single agri-environment scheme. The headline ‘The GLAS scheme is not working’ simply cannot be concluded from the evidence presented in our article.


The following sub-title of the media article is much more measured and although one could phrase it in a number of ways, is a more appropriate reflection of the content of the original research article:  “Measures aimed at protecting biodiversity in grassland are not being targeted properly according to a new report by top ecologists”. In the Conclusions section of the research article, we offer suggestions on how the targeting of the grassland options could be improved. Our research provides an important opportunity to learn how to improve these grassland options over time, but also to consider the kinds of biodiversity objectives to be implemented in the wider countryside.


The media article states that “Despite millions being paid to farmers to maintain species of rich grasslands, the report by Teagasc and UCD experts for the Irish Journal of Agricultural and Food Research concludes that GLAS is having little benefit in halting species decline.” This statement cannot be concluded from the evidence presented in our article. Our study was limited in scope, and our research does not provide evidence with which to assess the specific question of whether “GLAS is having little benefit in halting species decline”. We only looked at vegetation, and not other wildlife groups. We did not do a temporal analysis that allows us to infer trends over time. As stated in the research article, on the basis of expectations from other research, we would not expect the management of Traditional Hay Meadow and Species Rich Grassland options to *increase* species richness (or they would do so only very slowly).


The media article also states that “…research has shown that the payments did not halt the decline in these environmentally valuable areas.” We did not conduct a spatially representative sample that would allow us to conclude on whether the area of species-rich grassland was declining or not. Such research would be very valuable, but it was not the objective of this study.


Note also that the comment in relation to "undemanding eligibility criteria, coupled with under-researched management prescriptions, are unlikely to result in an increase in positive indicator species” specifically referred to the Traditional Hay Meadow option in AEOS (in the Conclusion section of the article).


Agri-environment schemes are complex, and difficult to design, to implement and to measure their environmental effectiveness. Across Europe, there has until recently been a general lack of research on the effectiveness of these schemes. Where research has been undertaken, it is clear that positive effects on biodiversity can be achieved, but require a high degree of careful design and implementation.  It is only by doing this kind of research that we can detect any shortcomings, and only then can we learn to improve agri-environment schemes so that they deliver for farmers, and deliver for the environment. (Note that DAFM have contracted ADAS to conduct an evaluation of the effectiveness of GLAS, as part of a 5-year project, beginning with a literature review.)
This is one of a limited number of research investigations of the effectiveness of Irish agri-environment schemes, and we are pleased to be able to contribute to this important topic. However, we are also very aware of the limitations (and the benefits) of the specific research project that is discussed here. We hope that this post helps to explain this in more detail.

UPDATE, 27 January, 2017: immediately after contacting @farm_ireland, they changed the title of the online article to the following: 'Performance of grassland biodiversity measures can be enhanced through improved targeting'.
We also contacted Darragh McCullough in relation to the article and title, but received no response. 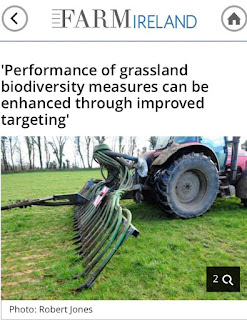