Grassland conservation options in AEOS from a results-based perspective

In a 2017 post, we outlined the main results from a publication (Ó hUallacháin et al., 2016) that compared the vegetation in three different options for grassland conservation under the Irish agri-environment scheme (Agri-Environment Option Scheme, AEOS). Here, we outline the main results of that study, and develop it further with a more detailed interpretation of that work from the perspective of results-based approaches. Across the three grassland options in that study, the options had the effect of preferentially enrolling and financially rewarding lower-quality vegetation. We show how a results-based approach could better target, incentivise and reward the provision of higher-quality vegetation, and make a greater contribution to biodiversity conservation. 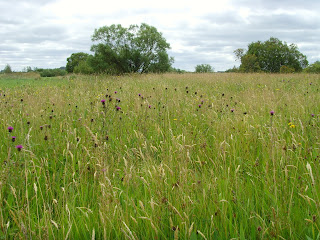 What did we study?

We conducted a snapshot survey of the plant community found in three different options for grassland conservation under the Irish agri-environment scheme, the Agri-Environmental Options Scheme (AEOS). We sampled the vegetation in 20 fields in each of three different grassland options (Traditional Hay Meadow (THM), Species Rich Grassland (SRG), and Natura) in AEOS (a total of 60 fields across 60 different farms). This gives us a good indication of the type of vegetation in the fields enrolled in these AEOS options at the time of our survey.


Why is this research of interest?

To our knowledge, this was the first published survey of grassland quality in different Irish agri-environment options. There is a widespread lack of measurement of the environmental impact of agri-environment schemes, despite the large amounts of budget allocated to such schemes. As an example of the prominence of such measures, the AE grassland measures were the three most popular measures in AEOS in 2013 (i.e. 51% of participants undertook SRG, 27% undertook THM and 19% undertook Natura measures on their farms) (cited in Ó hUallacháin et al. 2016).

High participation rates, coupled with payment rates of €314/ ha for SRG and THM and €75/ha for Natura, resulted in €19.25 million, €6.31 million and €3.03 million, respectively, being spent on these three measures in 2013. More recently, these measures (incorporating slight changes in eligibility and management criteria) have been included in the Green Low-Carbon Agri-environment Scheme (GLAS, the Irish agri-environment scheme that succeeded AEOS).

What were the main results?

All of the sites met the eligibility criteria and management actions.

Our results showed that fields enrolled in the Natura option had highest vegetation quality, those in the Traditional Hay Meadow option had lowest vegetation quality, and those in the Species Rich Grassland option were intermediate (although closer in quality to THM than Natura). Vascular plants associated with THM and SRG were: Agrostis spp., Ranunculus repens, Poa trivialis, Lolium perenne, Trifolium repens, and Cynosurus cristatus. Species associated with Natura were, for example, Carex spp., Filipendula ulmaria, Galium palustre, Cardamina pratensis, Hydrocotyle vulgaris, Succisa pratensis.

What did we learn?

Although the various sites fulfilled their eligibility and management prescriptions, the lack of clarity in relation to specific, measurable objectives for each grassland measure made it difficult to determine whether objectives for these measures were being achieved.

This research provided a useful insight into the range of vegetation quality that one finds within and across the different grassland options. As a snapshot survey, this research did not allow us to track trends over time. Thus, we do not know whether the vegetation quality in sites selecting these options is increasing or decreasing over time – because of this, we simply do not know whether these options are helping to halt species decline in the sampled fields. If the fields retained the same management over a 5-year period, then we would be able to re-survey them and measure changes in vegetation quality over time, and we would be able know their effects on species (increasing or decreasing). On the basis of other research, however, where sites are relatively species-poor, we would not expect the management specified under the Traditional Hay Meadow and Species Rich Grassland options to *increase* species richness (or they would do so only very slowly).

For popular and over-subscribed agri-environment measures such as the grassland options, a method of targeting to prioritise the inclusion of higher quality vegetation would increase the cost-effectiveness *within* an option.

Re-interpreting these results from a results-based perspective

In the original article by Ó hUallacháin et al. (2016), there was a brief discussion of how a results-based approach could provide a financial incentive for improved environmental benefits – for example, linking more positive species indicators to higher payment. Here, we develop and discuss this perspective in more detail.

The original Fig. 3 in Ó hUallacháin et al. (2016) is presented below (Fig 1). In a non-metric multidimensional scaling plot of grassland composition, each of the symbols represents the vegetation (species and % cover) across the 60 sites. In general (as indicated above) the vegetation quality increased from left to right.

Under a results-based approach, and in alignment with the ‘Provider Gets’ principle, one would expect a general relationship more like that below (Fig. 5), in which greater provision of an environmental benefit is associated with a higher payment. Added benefits of this approach include:

A results-based approach would, however, generate other requirements that include:

Agri-environment schemes are complex, and difficult to design, to implement and to measure their environmental effectiveness. Across Europe, there has been a general lack of research on the effectiveness of these schemes (compared to the number of schemes, and scale of budget). It is clear that positive effects on biodiversity can be achieved, but require a high degree of careful design, implementation, and monitoring. It is only by doing this kind of research that we can learn to improve agri-environment schemes so that they deliver for farmers, and deliver for the environment.

Ó hUallacháin, D., Finn, J.A., Keogh, B., Fritch, R., Sheridan, H. 2016. A comparison of grassland vegetation from three agri-environment conservation measures. Irish Journal of Agricultural and Food Research 55(2): 176-191.
O'Rourke, E and Finn, J.A.. 2020. Farming for nature: the role of results-based payments. Teagasc and NPWS.
Some of our other related research related to agri-environment schemes
Finn, J.A. and Ó hUallacháin, D. 2012. A review of evidence for the environmental effectiveness of Ireland’s Rural Environmental Protection Scheme. Biology and Environment 112B: 1-24. An Open Access version of this paper is available from the Teagasc repository, T-Stór. Click here for access to this article (requires sign-in).

Matin et al. 2020. Assessing the distribution and extent of High Nature Value farmland in the Republic of Ireland. Ecological Indicators, in press.