High Nature Value (HNV) farmland has been defined as “those areas in Europe where agriculture is a major (usually the dominant) land use and where agriculture sustains or is associated with either a high species and habitat diversity, or the presence of species of European conservation concern, or both”. Maintaining both the nature value of this farmland and the livelihoods of farmers in these areas is a key policy challenge 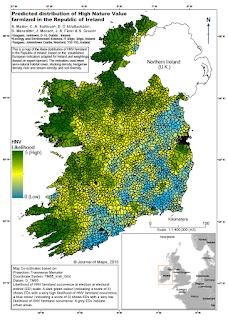 We mapped the likely distribution of HNV farmland based on established European indicators adapted for Ireland using the following indicators:


•Length of river and stream from OSI river-stream map


Data were modelled at the tetrad scale (2km x 2km), and presented here at the scale of Electoral Divisions. The resulting map (from Matin et al., in review) indicates the likely occurrence and distribution of HNV farmland in each Electoral Division, based on a scale ranging from very low (blue colour) to intermediate (yellow) to very high (green) (Fig. 3). Not surprisingly, western counties such as Kerry, Clare, Mayo, Galway, Leitrim, Donegal and Cavan exhibited greatest likelihood of containing HNV farmland while Dublin, Meath and Kilkenny had lowest likelihood. Nevertheless, there is considerable variation within counties.
To our knowledge, this is the first Irish national-scale map that has used objective agri-environmental criteria to predict the likely distribution of HNV farmland. This provides a reference point for the future monitoring of the distribution of HNV farmland in Ireland. It can also assist in policy planning and development for the rural environment. For example, comparisons of the spatial distribution of HNV areas and the spatial distribution of agri-environmental and other payments can assess the degree to which payments are targeted toward HNV farming systems. In addition, these data can be used to incorporate impacts on farmland biodiversity of, for example, land use change and climate change in national-scale models or scenarios.
As an indicator-based prediction, such maps should be interpreted within the limitations of the data used. The spatial scale of the map is restricted by the coarse scale of data at national level. Given the predictive and aggregated nature of the outputs, it is important to note that non-HNV farmland may still occur in areas with high likelihood of HNV farmland, and vice versa. We also know that some very specific types of HNV farmland are not well-represented by this approach. For this reason, this output is not suitable for strictly deciding whether farmers in certain areas should be eligible or not for agri-environmental measures aimed at HNV farming systems. Instead, there is a requirement for a farm-scale assessment to confirm the high nature value of individual farms. As part of the IDEAL-HNV project, we also examine the farm-scale characteristics of HNV farmland. See the project website (www.high-nature-value-farmland.ie) for further details.


Acknowledgements
This research was funded by the Stimulus Research Fund (award 11/S/108) of the Department of Agriculture, Fisheries and the Marine through the National Development Plan.


Matin et al. Assessing the distribution and extent of HNV farmland in the Republic Ireland. Ecological Indicators. in review, July 2019.