There is a lot of discussion about the use of multi-species mixtures within grazed grassland systems. Here, I take a look at *some* of the evidence - but note that this is definitely NOT intended to be a literature review. 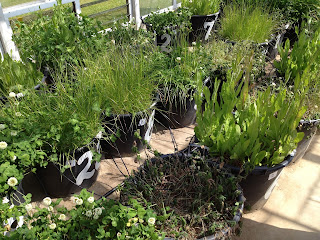 In assessing the benefits associated with multi-species mixtures, it’s important to disentangle the different and potentially confounding effects of plant richness, supply of nitrogen, and whether research has been conducted on grazed or mechanically harvested plots. Therefore, I tend to clarify these points about the different studies involved.

Diversity promotes yield in semi-natural grasslands
Ecological research conducted in relatively species-rich and nutrient-poor systems very clearly shows that grassland yield is enhanced by species diversity (e.g. reviewed in Hooper at al. 2005, Cardinale et al. 2007), and that multiple ecological processes may be more effective when species diversity is higher. In many studies (e.g. Hector et al 1999) one sees a very rapid response (ascending limb) from 1-5 species, and a smaller but consistent response as richness increases further (see Fig. 1 below).

Note, however, that the level of yield from the more species-rich mixtures is not as high as would be obtained if other (agronomic) species were used and with added inorganic fertiliser. However, the purpose of these experiments was to demonstrate the effect of biodiversity loss within natural ecosystems i.e the consequences as one goes from higher (right hand side of Fig. 1) to lower diversity (left hand side of Fig. 1). In addition, adding even modest amounts of nitrogen fertiliser to species-rich grasslands results in a very strong reduction in plant diversity (Kleijn et al. 2009).


Relevance to intensively managed agricultural grasslands…
The ability of more diverse plant communities to acquire available resources and convert them into above-ground biomass has obvious relevance for agricultural systems, although the results from extensively-managed (low-nutrient) semi-natural grasslands do not necessarily extrapolate to intensively-managed grasslands. Although ecological principles from diversity-function research therefore suggest that increasing plant species diversity in agronomic systems may improve biomass production, this has not been extensively tested. The potential multiple benefits of diverse agronomic crops with more than two species have been under-researched, but could have important implications for more sustainable agricultural practices by providing sufficient crop yield while minimising environmental impacts.

More recently, a number of studies have been investigating multi-species mixtures. I discuss some of these here.

Four-species grass/legume mixtures generally outyielded best-performing monoculture
The Agrodiversity experiment was conducted at each of 31 sites (17 European countries and Canada) (Fig. 2). Fifteen grassland communities comprising four monocultures and eleven mixtures of four functional types of species (each represented by one species) (see Finn et al., 2013 for details). The choice of species for use in multi-species mixtures can be strategically designed to include traits that maximise complementarity and interspecific interactions to improve resource utilisation and yield of above-ground biomass. Thus, we selected functional types that consisted of a fast-establishing grass, a fast-establishing legume, a temporally persistent grass and a temporally persistent legume. The selection of species varied across sites, but the most commonly used species were Lolium perenne L., Trifolium pratense L., Dactylis glomerata L., and Trifolium repens L. All plots were mechanically harvested.
There was a considerable range in site productivity, reflecting the different geographical and climatic regions across the study sites. Annual averages of total yield (dry matter) per site ranged from about 18 t ha-1 year-1 to about 3 t ha-1 year-1. Across all sites, yield of sown species (not including weed biomass, and averaged across years and seed density) of mixtures exceeded that of the mean monoculture in 99.7% of mixture communities with an average (across all mixtures and sites) ratio of mixture/monoculture yield of 1.77 (Fig. 3). Transgressive overyielding (better yields than in the best monoculture) occurred in 79% of mixture communities and was significant at 71% of sites. At sixteen sites, all of the mixture communities yielded more than the best monoculture community. The yield benefit of mixtures was already evident in year 1, and persisted for the three years of the experiment.
Across all sites, monocultures displayed much higher levels (and variability) of weed invasion than mixtures. The median percentage of weed biomass in the total yield of monocultures increased over time (15% in year 1, 20% in year 2 and 32% in year 3); in contrast, the median percentage of weed biomass in the mixtures remained consistently low (4% in year 1, 3% in year 2 and 3% in year 3).

The Agrodiversity experiment varied considerably in the use of inorganic nitrogen, with several sites operating under organic status, and the low-fertility sites only applied low or no inorganic nitrogen. However, the more productive sites did apply nitrogen at intermediate rates e.g. between 100 and 200 kg N per ha per year. What was absent from the experiment was a comparison with a monoculture with a high level of nitrogen that would act as a positive control i.e. to test whether the mixtures could outperform a monoculture with high N. Nevertheless, what was clear was that the magnitude of mixture benefits was sufficient for mixtures to regularly yield more than the best-performing agronomic monoculture (transgressive overyielding). This is striking for three main reasons: first, the rapidity and frequency of transgressive overyielding; second, the occurrence of transgressive overyielding across such a wide range of mixtures, and; third its occurrence across such a wide range of sites that differed in soil type, productivity and climate. 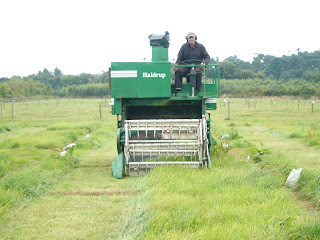 Having demonstrated strong benefits of four-species mixtures, we are now looking at the benefits of six species mixtures with two grasses, two legumes and two herbs. The 2018 (with natural drought) total yields in plots that were mechanically harvested were as follows:

This research is summarised in a recent popular article  by Guylain Grange and Saoirse Cummins  (Agriland article online).

Grass-legume mixtures maintained yield despite substantial reductions in N fertiliser
Grass-legume mixtures in grassland forage systems can benefit from symbiotic N2 fixation of legumes, thereby increasing total harvest yield, total N yield, and forage quality. Because legumes have access to atmospheric N2 for their N requirements, the relative availability of soil N increases for grasses in mixtures due to ‘N sparing’ (increased availability of soil N because legumes rely on symbiotic N2 fixation). Therefore, the use of grass-legume mixtures could allow substantial reductions in amounts of industrial N fertiliser in agricultural grassland systems without a compromise in yield. At the Swiss site of the Agrodiversity experiment, Nyfeler et al. (2009) compared monoculture and mixture yields across three levels of nitrogen (50, 150 and 450 kg N ha-1 year-1) (Fig. 4). Their results indicated a high potential for N-fertilizer replacement: grass–clover mixtures containing 40–60% clover and receiving 50 or 150 kg N ha-1 year-1 achieved the same yield as grass monocultures fertilized with 450 kg N ha-1 year-1 (Nyfeler et al., 2009). Diversity–productivity effects were reduced at the highest level of N fertilization and at 450 kg N ha-1 year-1, they virtually disappeared in the third year.
These results illustrate an example of sustainable intensification and 'more from less'; it is possible to get more yield from less input by using legumes to replace the input of nitrogen fertiliser.

Yield benefits of mixtures persist under grazing
Many experiments on multi-species mixtures have been conducted under conditions where the forage has been harvested by mowing (although variety testing for grasses and clovers in pastures is harvested in the same way). Do the benefits of mixtures that are observed under mowing also prevail under grazing? There are many experiments with grass-clover (2-species) mixtures under grazing; however, comparisons of more species-rich combinations are less common.
A recent study investigated whether grazing modifies the benefits of mixtures on total N yield compared to mowing (Huguenin-Elie et al., 2016). The design included N2-fixing and non-fixing species, as well as shallow- and deep-rooting species. Lolium perenne (Lp) monoculture and mixtures with Cichorium intybus (Ci), or/and Trifolium repens (Tr) and Trifolium pratense (Tp) were compared under grazing or mowing for their N yield and capture of fertilizer and atmospheric N2. Mixtures of the N2 fixing and the non-fixing species with 145 kg N ha-1 yr-1 yielded as much N as the L. perenne monoculture fertilized with 350 kg N ha-1 yr-1, showing the considerable benefit of mixtures for N efficiency. The benefits of the mixtures on N yield were similar under grazing and mowing. Grazing did not modify the proportion of N derived from fertilizer and symbiotic N2 fixation in the plants (Huguenin-Elie et al., 2016).

In a two-year grazing experiment (with 75 kg N ha-1 yr-1) in France, an increase of botanical complexity from one to five species (two grasses, two clovers and chicory) resulted in positive effects on animal performance (Roca-Fernández et al., 2016). They distinguished between monocultures of perennial ryegrass, ‘mixed swards’ of grass and clover, and ‘multi-species swards’ of grasses, clovers and chicory. Compared to mixed swards, multi-species swards improved production of milk (+0.8 kg/day) and milk solids (+0.04 kg/day), which was attributed to enhanced sward quality and increased dry matter intake (+1.5 kg DM/day).

Overall, these experiments point to the ability of more complex (>2 species) mixtures to improve yields for livestock production, and with less input of inorganic nitrogen. Several studies have reviewed the contribution of grass-legume mixtures to the nutrition and production of livestock (e.g. Lüscher et al. 2014, Dewhurst et al. 2009).

As have many other authors, Grace et al. (2019a) stated that “Multispecies swards show potential for higher DM production from lower N inputs compared with PRG‐only swards. However, maintaining the proportions of key species may affect the productivity of such swards." This is an important point: to achieve the benefits of multispecies mixtures under intensive management while maintaining the multiple species that provide the benefits. This is where systems-level research can help to investigate management to promote species’ persistence (duration of grazing rotation), and implement effective techniques to re-introduce species (e.g. oversowing) that may be declining in the sward. 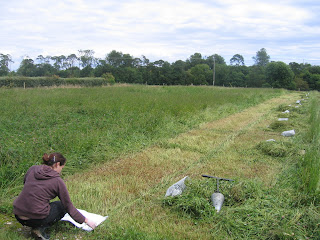 Much of the above content has been taken from a conference paper by Finn et al. and submitted in 2017 to the 54th Annual Meeting of the Brazilian Society of Animal Science.