Multi-species mixtures are expected to benefit grassland production because of the yield advantage from nitrogen fixed by clover, the variety of rooting structures allows them to access a wider range of soil water and nutrients, and their canopy structure that allows them to intercept more sunlight. In addition, they are associated with lower parasite loads in livestock, reduced greenhouse emissions, and increased carbon sequestration. Here, we give a brief overview of some of our current (2020) research on mixtures at Teagasc, Johnstown Castle. 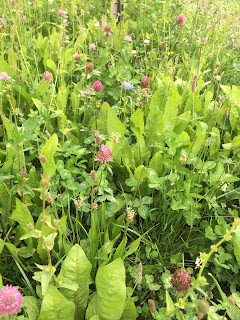 The question we are most often asked is: how many species should be in a multi-species grassland mixture? The answer to this depends on what you want from the grassland, and the growing conditions. We have largely focused on forage yield and quality, but are also interested in gaseous emissions intensity (how much GHGs are lost per unit yield), carbon sequestration potential and weed suppression. In general, a modest number of about 3 to 6 species seems to be optimal in intensively managed grasslands. Any fewer and you may not maximise the benefits; any more, and it becomes difficult for some of the species to persist, especially in regularly grazed or harvested swards. What is probably most important is the type of species, and the inclusion of legumes is fundamental for the incorporation of symbiotically fixed nitrogen.

Multi-species mixtures offer an opportunity to reduce the use of inorganic fertiliser, without compromising forage yield. With the emphasis on reductions in greenhouse gas emissions for grassland systems, there is a clear focus on reduced use of inorganic nitrogen fertiliser, and its embedded emissions. In a common experiment across 31 international sites (from Canada, to Italy and Iceland), the total annual yield of four-species mixtures (two grasses and two legumes) consistently yielded better than the average of the four monocultures, and even yielded more than the best-performing monoculture in a majority of cases.

Similar positive effects of mixtures arose from the SmartGrass experiment.

As indicated above, the inclusion of clover in swards can displace the use of mineral nitrogen fertiliser. In addition to saving costs and labour, legume-based mixtures can reduce greenhouse gas emissions, particularly nitrous oxide (N2O) which is a by-product of N fertiliser land application. Results from the greenhouse gas measurements carried out by Saoirse Cummins showed that the annual greenhouse gas emissions per unit output (DM yield or biomass N) from the multi-species mixture were lower than those from either the high input perennial ryegrass or perennial ryegrass receiving 150N (Fig. 2). Chicory or plantain inclusion in swards can also help lower nitrate leaching. The N2O emissions intensity of perennial ryegrass receiving both 150 and 300 kg ha-1 yr-1 nitrogen fertiliser, and a six species mixture (150 kg ha-1 yr-1). These represent the total annual N2O emissions (g ha-1 year-1) produced per kg biomass N or tonnes DM yield.

In a recent youtube video about mixtures by DLF, see Guylain and Saoirse talk about their research (from 4.09 minutes), amid related research ongoing at UCD and WIT.

Most mixtures experiments have been conducted under cutting conditions (simulated grazing), and there is a need to investigate and demonstrate mixtures under grazed conditions in Ireland. At Johnstown Castle, we are sowing and comparing lower-nitrogen (100 kg ha-1 yr-1) multi-species mixtures and higher-nitrogen (200 kg ha-1 yr-1) ryegrass-clover swards. These are currently being implemented in our dairy and beef farm at Johnstown (and at Curtin’s, at Moorepark). To date, the dairy herd at Johnstown is grazing happily on the mixtures, and 2020 will be the first year in which we can compare milk quantity and quality. In the meantime, we are keen to learn how best to manage these swards. 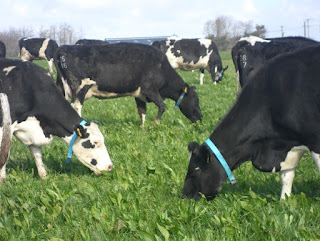 There is no reason to believe that mixtures cannot be beneficial under grazing. In a two-year grazing experiment (with 75 kg ha-1 yr-1 of nitrogen fertiliser) in France, an increase of mixture diversity from one to five species (two grasses, two clovers and chicory) resulted in positive effects on animal performance. Compared to ryegrass-clover swards, multi-species swards improved pasture intake (+ 1.5 kg DM/day), production of milk (+0.8 kg/day) and milk solids (+0.04 kg/day).

Research by Thomas Moloney (at Teagasc, Grange, as part of the SmartGrass project) showed that under favourable ensiling conditions, two-species and multi-species mixtures preserved comparably to perennial ryegrass. Note that they had a greater requirement for rapid wilting and/or adequate effective additive.

Climate models indicate that summer droughts will become more frequent and more severe. In Europe, this means that grasslands will be increasingly subjected to intense winter rain precipitation and summer droughts. In a two-year experiment in and another in 2018, we have found a positive relationship between plant diversity and yield stability in intensely managed grassland, even under experimental drought conditions. The benefits of multispecies mixtures were so strong that yields from a mixture of species under drought conditions matched or exceeded yields for monocultures under normal rainfall conditions (Fig. 1, above, and also work on mixtures and drought by Eamon Haughey and collaborators). 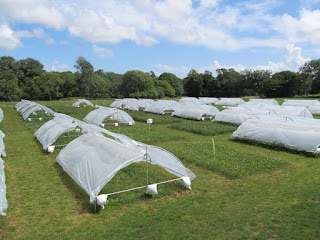 Strong weed suppression, and persistence of species over time

In general, multi-species mixtures are excellent at suppressing weeds. This is important because a post-emergent spray is not possible. Over time, clover content will reduce if large quantities of mineral nitrogen are spread. However, lowering fertiliser quantities in summer will favour clover growth. Ensuring clover (and herb) persistence over time (more than 4 years) is likely to the biggest issue. This is possible with appropriate management. However, this topic requires more research on optimal management of mixtures under grazing and soil types, improved breeding for persistence in mixtures, and mitigation actions such as oversowing of seed to establish and rejuvenated swards, where necessary.

Multi-species mixtures can be an effective, farm-scale practical action to maintain or increase forage from less inputs. They can also mitigate the effects of severe weather events such as drought. Combined with their other benefits, mixtures offer a strong potential to improve the sustainability of livestock production.

For further reading, see an introduction to multi-species swards in a Farmers Journal article (for subscribers), and in an open article from Teagasc, Guylain Grange describes benefits of and advice on establishing a multi-species mixture.