Based on a Teagasc press release from August 2021 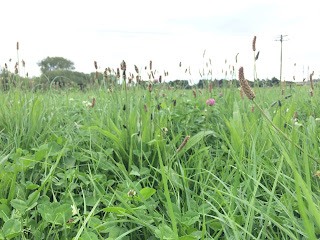 Even after increasing fertiliser rates on perennial ryegrass in monoculture, it did not yield as much as the highest diversity mixture. 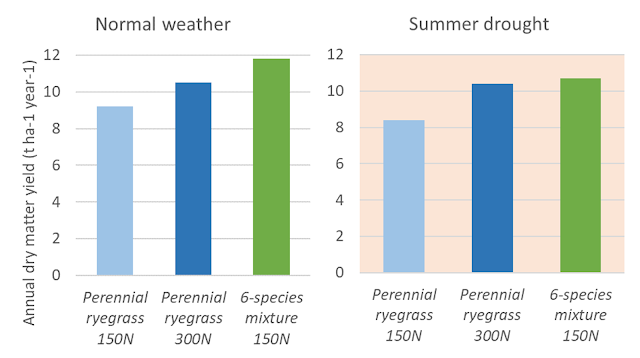 As expected, total annual yields were generally reduced by the experimental drought. Nevertheless, the higher-diversity lower-input mixtures under unfavourable drought conditions achieved similar yields to those from the low-diversity, high-input comparison under favourable rainfed conditions. This indicates the potential for multi-species mixtures to mitigate the effect of more variable weather conditions on grassland yields across the whole year.

Dr John Finn, a senior researcher at Teagasc’s Environment Research Centre at Johnstown Castle said; “The need for research on drought in Irish grasslands has become all too obvious in recent years, and that need will only increase in the coming decades. The use of multi-species is one strategy to improve the resilience of grassland production.”

What proportions of grasses, legumes and herbs are the best?

The most productive swards were a combination of species from the three functional groups of grasses, legumes and herbs. With legume proportion between 30 and 70%, yields were better than the best monoculture.

More diverse mixtures of grasses, herbs and legumes had higher (darker green) annual yields (tonnes/ha/year-). Results averaged across two years under rainfed conditions (left) with a 9-week summer drought applied (right). Yields from plots with only herbs (H), legumes (L) and grasses (G) monocultures are indicated in the corner points. The red line on the yield scale indicates yields from perennial ryegrass with 300 kg/ha/year of nitrogen. As one moves from the centre toward G, L, and H, the change in colour indicates the changes in yields with increases in the proportion of grass, legume and herb, respectively.

Teagasc Walsh Scholar Guylain Grange, who conducted the experiment said; “Multi-species mixtures can be a practical, farm-scale solution for intensive grassland production with lower nitrogen fertiliser input, and can mitigate the risk associated with summer droughts due to climate change. Further research at Teagasc is investigating the use of multi-species mixtures under grazed conditions.”

This research is reported in the Journal of Applied Ecology and available online as an Open Access article: https://besjournals.onlinelibrary.wiley.com/doi/abs/10.1111/1365-2664.13894

This research was made possible by a Walsh Scholarship award by Teagasc. Guylain Grange conducted the experiment at Teagasc’s Environment Research Centre at Johnstown Castle, Wexford, and is a PhD student at Trinity College Dublin. Dr Caroline Brophy (Trinity College Dublin) and Dr John Finn (Teagasc) supervised the research.